Can The U.S. Become Energy Independent By Next Year?

In a pivotal shift, the US is only months away from full energy independence. By 2030, total primary energy production will outpace primary energy demand by about 30%, according to Rystad Energy’s latest forecast.

“This milestone follows a strong period of growth in both hydrocarbon and renewable resources, and we forecast that the US will have primary energy surplus – and not a deficit– by February or March 2020, depending on the intensity of the winter season,” says Sindre Knutsson, vice president on Rystad Energy’s gas markets team.

“Going forward, the United States will be energy independent on a monthly basis, and by 2030 total primary energy production will outpace primary energy demand by about 30%,” Knutsson added. 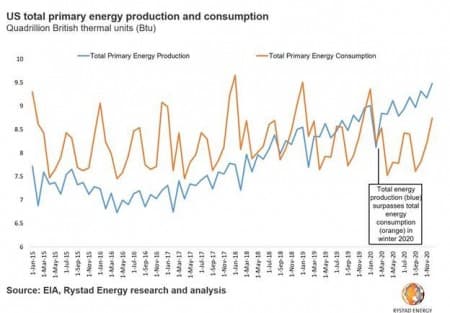 These developments are already in full swing. Rystad Energy predicts that the next monthly release from the Energy Information Agency (EIA) will reveal that the US has been self-sufficient in primary energy for a full 12-month period, from October 2018 through September 2019.

“This is the first time this will have happened since May 1982,” Knutsson observed.

This latest development spells out some broad implications on a number of fronts.

A lot can change between now and 2030.  Chances are good that it will.  Energy independence is kind of a dicey term.  When referring to oil it should not be misconstrued to mean that we will not be importing oil.  We do and will continue to do so because domestic production of heavy oil is rapidly declining.  What is rapidly increasing is light oil.  Refiners can not make the range of products from light oil that they can from heavy oil.  And most Gulf Coast refineries were designed to process heavy oil so we have a miss match.