U.S. onshore oil and natural gas production is set to rise from October to November, propelled by supply growth in the Permian Basin and Haynesville Shale, according to updated projections Monday from the U.S. Energy Information Administration (EIA).

Natural gas production from seven key U.S. producing regions — the Anadarko, Appalachia and Permian basins, along with the Bakken, Eagle Ford, Haynesville and Niobrara shales — will grow by 257 MMcf/d from October to November to reach 87.9 Bcf/d, EIA said in its latest Drilling Productivity Report (DPR).

The Haynesville will see the largest month/month increase at 135 MMcf/d. Natural gas output is also expected to rise in the Permian (plus 78 MMcf/d), Appalachia (plus 41 MMcf/d), Niobrara (plus 19 MMcf/d), Eagle Ford (plus 14 MMcf/d) and Bakken (plus 8 MMcf/d) regions. The Anadarko will see natural gas production decline 38 MMcf/d to just over 6 Bcf/d in November, the DPR data show.

EIA’s drilled but uncompleted (DUC) well count indicates producers across the Lower 48 drew down their backlogs from August to September, with overall DUC total for the seven regions falling 241 to 5,385. The Permian entered the period with the largest backlog and saw its DUC total decline the most month/month, drawing down 125 DUCs to end with 1,869 as of September. The Anadarko (down 16), Appalachia (down 16), Bakken (down 27), Eagle Ford (down 43), Haynesville (down 6) and Niobrara (down 8) also saw declining DUC totals from August to September, the DPR data show.

In the “largest (and quickest) drawdown to date,” the current DUC inventory is crossing the critical “normal level,” analyst John Freeman said. “Over the last year, completions have outpaced new drills by nearly 250 wells/month, an unsustainable delta of which has never occurred.”

Hmmm, surely it's just me, but I don't think I've ever heard of the "Niobrara"

will Google it now to see where it is located.

What did you find, Steve?

yep.  But if you Google the word, oil and gas won't be the first, second or third hit.  considering all of the other plays mentioned in the article, Niobrara surely is small peanuts.

True, but nothing to sneeze at either.  D-J gets all the gas cred and it's a baby brother to the Bakken to the north. 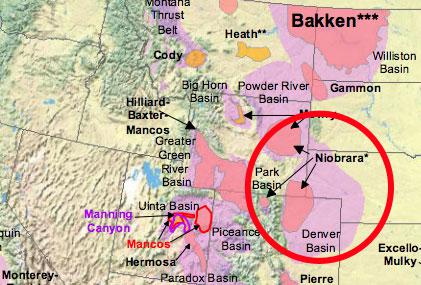