The Obama administration is telling Japan and other allied countries they will have to wait before moving forward on plans to buy American natural gas, people involved in the talks said.

A dramatic increase in U.S. natural-gas production has led several U.S. companies, including Sempra Energy SRE -0.28%and Dominion Resources Inc., D -0.22%to seek permits from the Department of Energy to export gas to countries that lack free-trade agreements with the U.S. Exxon Mobil Corp. XOM -2.61%Chief Executive Rex Tillerson said Wednesday his company was looking at exporting from the U.S. Gulf Coast and Canada. 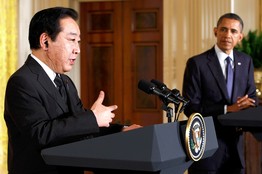 Sempra and Dominion are working with Japanese partners that want to import the gas as their country looks for new power sources. The U.S. currently exports relatively small amounts of natural gas via pipelines to Canada and Mexico, but a wave of recent export proposals marks the first time in decades that companies have sought to liquefy U.S. gas and transport it overseas.

But exports have become a hot-button topic for some lawmakers in Washington and have highlighted uncertainty about what kind of energy power the U.S. wants to become as companies unearth huge supplies of natural gas in shale rock.

"We are going to have to answer some basic questions about our role as a producer," Michael Levi, a senior fellow at the Council on Foreign Relations, said. "The fact that some of these debates have been so difficult stems from their novelty."

Japan's prime minister raised the gas-export issue with President Barack Obama at an April 30 meeting, one of several occasions on which Tokyo has pushed the administration.

But the U.S. has told Japan, a leading military ally in the Pacific, it will have to wait, in large part because of the political sensitivities, participants in the talks said.

"I think it's going to require more people taking a look at it," an administration official said, adding, "We're very sympathetic to Japan. They're in a very difficult situation."

Following the disaster at its Fukushima Daiichi nuclear plant last year, Japan pulled the plug on all of its nuclear reactors, forcing it to replace a power source that generated about 30% of its electricity. The government is studying whether to restart some of the reactors, but nuclear power is likely to play a smaller role in five or 10 years.

That is when the U.S. natural gas could start arriving, but only if the U.S. grants permits to export terminals that would liquefy the gas for shipping across the Pacific.

Japan isn't the only country waiting. "The requests come from everywhere," the administration official said. Natural gas is much cheaper in the U.S. than in Europe and Asia, where the fuel's value is often tied to the price of oil. Companies importing American gas would be able to reduce costs with contracts tied to the lower U.S. prices.

Mr. Tillerson laid out the case for exports at Exxon's shareholder meeting Wednesday, saying they would create jobs and help the U.S. trade balance. Sen. Lisa Murkowksi, a Republican from Alaska, asked President Obama in April to expedite permits for natural-gas exports. She said exports could give Alaska a market for gas from its North Slope, which lacks a gas pipeline to the lower 48 states.

Opponents, including Rep. Ed Markey of Massachusetts and some other congressional Democrats, say the U.S. could boost its energy security by keeping its natural gas at home. Oil-and-gas entrepreneur T. Boone Pickens, in an interview, objected to the idea of selling the gas at a discount to global prices. "You're kind of giving your own stuff away, and it's stupid to do that," said Mr. Pickens, who wants U.S. trucks to use natural gas.

"It is difficult for the U.S. to say yes [to exports] because of the presidential election," said Hirohide Hirai, director of the petroleum and natural-gas division of Japan's economy ministry. "There won't be any deal with any country before November."

U.S. officials say they are weighing how exports would affect job creation, trade and the domestic price of natural gas. A price spike would hurt consumers and weaken a competitive advantage enjoyed by U.S. manufacturers that use natural gas as a raw material. An Energy Department assessment is due later this year.

Maybe could be a win/win siuation.  The Japanese need this, and perhaps would create jobs -- maybe thousands -- for Americans and not push the price of natural gas here at home up too much.  May be some kind of incentive for American manufacturers. to help them more.  ??????  Japan an ally. You help your friends.