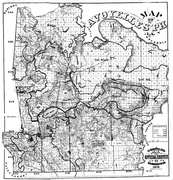 The earliest record of a permit for an oil well in Avoyelles Parish is June 19, 1920 for the Bordelon well near Goudeau. Only four wells were permitted in Avoyelles in the 1920s, with two near Cocoville and one near Fifth Ward, In 1933 the Haas oil field was discovered south of Bunkie which set off an oil boom in this part of the parish. The Haas field still produces oil today. In the 1960s, there were several wells permitted during a second oil boom for the parish. In the 1970s, much of the parish was leased for the Tuscaloosa Trend which did not fan out. In 2009, drilling began in the deeper Austin Chalk formations, with exploration of the Tuscaloosa Shale coming soon. GEOLOGICAL LAYORS BENEATH AVOYELLES: Frio ~3,000 feet; Sparta at about 6.500 ft.; Wilcox ~12,000 feet; Austin Chalk ~15,300 feet; Eagle Ford ~15,800 feet; TMS below Eagle Ford.

Can y'all shed some light on what is really happening in Avoyelles. 6 Replies

You need to be a member of Avoyelles Parish to add comments!

Looks like new White River permit is about 7 miles east and along strike with the EOG Eagle well (first hz frac AC well in Louisiana).

Thank you for sharing your knowledge RM.   We appreciate you.

Figure they plan to perforate this old well bore at whatever level (assuming that casing has good cement behind pipe) and test that formation. This may include stimulation efforts.

So, they don't have to do any type of drilling or fracking, but just take over the old well?

Present operator is re-entering the old Moncrief Martin deep well that was plugged in 2010 (SN 154571). Description in SONRIS is exactly what is saying, I.e. they found the plugged well location, dug down to expose the top cap on the casing, cut that off and installed a wellhead.

so, what exactly does that mean?