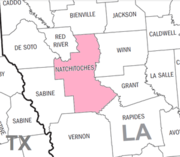 Black Lake Field -- When Will the Leases End? 45 Replies

Lease offers in and around the Ashland Field by what operators? 3 Replies

You need to be a member of Natchitoches Parish to add comments!

You are right of coarse. We are lucky to have the land - and the timber meanwhile - and it's been in the family since the late 1800's. You've quite cheered my up! Thank you!

Many are flying blind, not just you.

The myopia will clear . . . if and when you're ever offered a new lease in the future.  And the closer your land is to the Guin well, the better.  So, like I'm telling my own family, it may take a few years (if we're lucky).

Hey, we've owned the land since the 1800's, and there's been numerous shallow leases come and go over the years.

Plus, the going price for the land (with its minerals) has now increased in value per all of the O&G speculation.

Not a bad investment to hold onto, if you ask me.

Thanks GoshDarn. I really appreciate the insight and the information. We were leased with Chesapeake, but they did not renew after the extension ran out. It's like flying blind when you live across the country from LA.

Might I suggest taking Ashland commentary to either Dee's 4-13-7 discussion or to an Ashland discussion (there have been a couple of old ones, are start a new one)?

Basically, the Ashland unit situation is complicated by the low price of NG and CHK being the operator.  As far as I know, CHK does not have any leasing going on -- presently -- in and around Ashland.  And I just spoke with someone who would know in the last few days.

But it should be noted that the Guin well in 20 13N 7W came in at a very strong IP, as is clearly published on SONRIS:

A very good well that continues to produce at a strong volume.

Note:  This is an Ashland unit well.

Ergo, per that IP and its present production volume, it seems to me that your question: "Is it all over for the Ashland area . . ."

Might best be answered in this way.  If CHK does not flip its Ashland leases to another operator or do a JV deal or a farm-in -- then the possible future leasing in the area could be stalled for the foreseeable future due to the pricing range that NG is hemmed in by.

But still, CHK or another operator could have other reasons to change course based on the stats from this one well.

Also, there has been some "top leasing" or shallow leasing awhile back by other operators in the general vicinity, yet I'm unsure of the status of that leasing.

So, as with those I've advised in my own family with un-leased land in Ashland, I would say it's a waiting game.  New demand in a couple of years for NG, if this does, indeed, materialize . . . could drive renewed leasing.

Or I could be wrong.  It might happen sooner, rather than later.  Few would know except those in CHK's corporate office.

I do advise any and all landowners to check with a good O&G lawyer before a lease is negotiated and/or signed.

The only discernible interest in the Ashland area was by Chesapeake.  They made one good well and then they abandoned the area.  Whether the reason was geologic or dry gas economics, I've never heard anything I would consider reliable.  The Guin well results would likely attract some future interest at higher nat gas prices but only time will tell.  Across the entire basin there is basically no Haynesville Shale exploration at this point only production in proven areas.

Thanks Skip. I didn't realize that Natchitoches Parish was so out of the action. Is it all over for the Ashland area then?

MKM, I have not heard of recent leasing in Natchitoches Parish by any operator.  EnCana is drilling primarily in Red River Parish with an occasional Sabine Parish permit.  Considering the results of the Haynesville wells to date I would doubt that there is any interest in north Natchitoches unless it would be for some other formation(s).

I've read the occasional financial news comments about EnCana deciding to increase activity in the Haynesville shale (2012 to date). Since I don't live in LA currently, it's hard to know what impact, if any, that EnCana is making there. Do those of you who live there see any signs of action? Any indication that EnCana is looking for leases?

We need some help for 2021. We have 2 options for giving. Thank you for your consideration.