The Bakken and Eagle Ford may currently be the largest unconventional oil producers in the U.S., but the two fields certainly do not hold a monopoly on horizontal oil. In fact, North America's shale oil plays may prove to be just as abundant and diverse as the continent's natural gas plays. SM Energy's (SM) earnings and operating update released yesterday after the close provides a vivid illustration to that effect.

While the Eagle Ford and Bakken continue to be SM's most significant operating areas, this very reasonably valued 115,000 Boe/d, $5.5 billion enterprise value company has been able, in the course of just few quarters, to unveil three additional sizeable acreage positions in several emerging oil plays: Mississippian Lime in the Permian Basin (not to be confused with the Oklahoma Miss Lime play where SandRidge and Chesapeake are the key players); stacked oil plays in Powder River Basin; and Woodbine/Eagle Ford play in East Texas. While all the "new venture" plays are in early stages of evaluation, results to date have been quite impressive. Today's conference call (10:00 am Eastern Time) should provide details with regard to SM's progress in these plays.

In the Northern Midland Basin, SM Energy has leased approximately 66,000 net acres, primarily in Borden County, prospective for Permian Mississippian Limestone oil play. SM drilled its first horizontal test in the play, the Roy 2403H, in September 2010. Since then, SM turned in line another 10 wells; five additional wells are currently completing or waiting on completion. 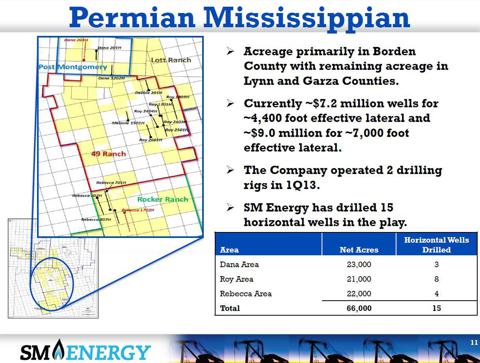 Jean Dickson is now a member of GoHaynesvilleShale.com
7 hours ago
Welcome Them!