The Late Cretaceous Austin Chalk formation is present in the subsurface paralleling the U.S. Gulf Coast from Mexico to Florida and produces from numerous fields in Texas and Louisiana along a trend over 300 miles in length and over 40 miles in width. Conventional drilling with vertical wells was marginally successful in developing the fractured Austin Chalk reservoir. The development of horizontal techniques greatly enhanced the productivity of the wells by intersecting multiple fracture sets. Various methods of exploration have been used to explore for the sweet spots within the chalk with mixed results. No one method has worked in all areas and seldom in many of the sweet spots.

The Austin Chalk reservoir is described as tight, fossiliferous, fractured limestone interbedded with shales and marls. Although the matrix contributes to production, the high initial rates result from fracture permeability. The thickness of the Austin Chalk ranges from 50 to more than 600 feet with specific targets within this interval. The depth of the main productive chalk trend ranges from 5500’ to 16000’. The Lower Smackover Brown Dense formation is an unconventional oil reservoir found in southern Arkansas and northern Louisiana. The formation ranges in vertical depths from 8,000 to 11,000 feet and appears to be laterally extensive over a large area ranging in thickness from 300 to 550 feet. Below is a map indicating the company’s general area of interest in the play. The Lower Smackover Brown Dense formation is an Upper Jurassic age, kerogen-rich carbonate source rock found across the Gulf Coast region of the southern United States from Texas to Florida.

The Haynesville formation is a layer of sedimentary rock more than 10,000 feet below the surface of the Earth in the area of northwestern Louisiana, southwestern Arkansas and eastern Texas, with some of the formation stretching well across the northern central portion of the Louisiana. Several energy companies have begun work in the area to explore the shale formation and drill for natural gas based on findings indicating a potentially large supply of gas trapped within some portions of the shale. 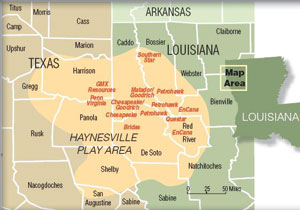 The formation is of a type once considered too costly to explore, but rising energy costs and newer technology and processes have changed that, leading to a rush of activity as energy exploration companies have begun to lease property in north Louisiana in preparation for possible drilling and production. In light of that, the value landowners are able to get for selling leases has risen sharply.

The most active areas have been Caddo, Bienville, Bossier, DeSoto, Red River and Webster Parishes of Louisiana plus adjacent areas in southwest Arkansas and east Texas. With the comparatively sudden change in activity have come questions and concerns about the prices landowners are getting for leases, the impact of new exploration and production activity, and government oversight of the industry. 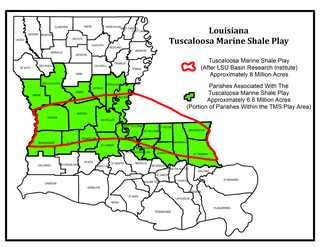 The Tuscaloosa Marine Shale (TMS) is a sedimentary rock formation that consist of organic-rich fine-grained materials (sediments) deposited in a marine environment that existed across the Gulf Coast region approximately 90 million years ago. The TMS includes the Eagle Ford Shale being similar in geological age.  The August, 1987 Bulletin (Volume 7) of the LSU-Basin Research Institute (BRI), Baton Rouge, indicates a potential reserve of about 7 billion barrels of oil in the TMS. Its thickness varies from 500 feet in southwestern Mississippi to more than 800 feet in the southern part of the Florida Parishes in southeastern Louisiana, within an approximate depth range of 11,000 feet to the north to more than 15,000 feet to the south.

The current TMS Oil Play targets unconventional reservoirs that are petroleum source rocks where petroleum hydrocarbons (oil and gas) originated in a high pressure and temperature geological subsurface environment. Not all of the petroleum hydrocarbons originally generated have migrated out of the source rock (TMS) which is now being explored for oil and /or liquid hydrocarbons with advanced (horizontal) drilling and completion (hydraulic fracturing, called fracking) technologies in a current favorable economic climate.