Established for mineral owners in Union County to share info on leasing and drilling activity in this county. Open to all landmen and others to share pertinent info.

SWN passes up acreage renewal in this county in Ark. 17 Replies

Happy Thanksgiving to all!I have been away from this site for quite some time. With all the latest news in the O&G industry is any of it taking place in Union county? Anything going on between Smackover and Mt Holly?My Best,RogerContinue

It seems that all of the conversation about lower brown dense takes place on one thread.  It also seemsthat all of the interest and activity is in Union Parish.  I am curious if any mineral owner in lower southeastern Union County has had their…Continue

You need to be a member of Union County, AR to add comments!

While this may be a disappointment to all mineral owners, it may well be a blessing in disguise as now the local independents may be able to lease prospect ideas they have without concerns over dealing with SWE. I wish all of you the best through this transition and mayhaps a local operator will come see some of you as the leases open up. Good luck!

I have the same situation in Columbia County.  Contacted Landperson for SWE and got the following reply.

"Hi ,
I talked to Kelley Jones, the project manager for Arkansas,
and she said it was doubtful that Southwestern will be extending any leases.
If they do it will be for specific township, section and ranges not all you own as in the past. "

Hope this information is of some help.  It appears that the rush to lease in South Ark is now over.

On May 11th my lease with SWE expired with approx. 2000 acres located in the Strong Ark.

area of Union County.  I have talked with several other owners whose leases were not renewed.

Apparently, SWE is giving up in this area of Ark.

Is thereany new info on SWE renewing leases this year for the South Union County or Union County area?  My leases come up for renewal in May and Dec, 2014.  Any rumors or opinions?

Roger, I went to school at MT Holly and know your area.  I do not know if the brown dense leasing has gone that far north or not.  There were reports of leasing up to Mt Holly, east to Libson, and farther east along Mt Holly road north of the airport and including the airport.  Except for this area, the leasing has been south of hwy 82.

Greetings all, I have land/minerals in Union county between Smackover and Mt. Holly on what is known as the Silverhill loop. I have never leased this. Is it not in the right area for oil? thanks Roger

How can I verify ownership of mineral rights in Union County, Arkansas?

Be sure to read comments in Exhibit 6

Sharewith companies that want to lease or drill on their land for oil sh... 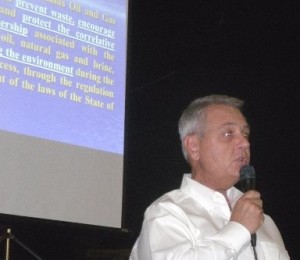 Lawrence Bengal, director of the Arkansas Oil and Gas Commission, speaks Wednesday during a public meeting at the Magnolia Junior High School Auditorium.


South Arkansas landowners who may be unaccustomed to dealing with companies that want to lease or drill on their land for oil should arm themselves with information, Lawrence Bengal told about 50 people in Magnolia on Wednesday night.

Bengal, director of the Arkansas Oil and Gas Commission, spoke to area residents during a public meeting at the Magnolia Junior High School Auditorium. It was the second of two meetings the commission set in South Arkansas to familiarize landowners with the leasing process. CLICK HERE to read magnoliareporter.com's exclusive report on the June 23 meeting in El Dorado.

Land leasing for drilling activity has become relevant because of oil company interest in the Lower Smackover Brown Dense, a rock formation approximately 10,000 feet below South Arkansas. During the June meeting in El Dorado, commission member Mike Davis of Magnolia said exploration was in an "embryotic" stage. Only after oil companies spend millions of dollars for test wells and core samples, and production data and research, will it be known if there are recoverable amounts of oil in the Brown Dense. There is no guarantee, Davis told the El Dorado audience.

On Wednesday, Bengal said the commission was on a mission to help the public understand what's going on.

"The Brown Dense, to date, has not produced (oil)," Bengal said.

Two test wells have been drilled. "One test well has produced some oil. We are early on in the development of the Brown Dense. We are now in the leasing phase," Bengal said.

"South Arkansas, unlike the Fayetteville Shale, is not unaccustomed to leasing. But the Brown Dense is going to be a little bit different in that the potential for production will occur outside the historical producing fields," Bengal said.

"Our goal is to get ahead of the curve and provide as much information as possible," he said.

The commission does not have the authority to help landowners negotiate leases or to interpret leases. They emphasized that landowners should negotiate agreeable terms with oil companies, or employ an attorney to do so.

They also went into detail about the concept of integration - or what happens when an individual landowner refuses to accept an agreement or to negotiate at all. Since there may be many parties who want to see a well drill and oil produced, landowners who don't consent are viewed legally as failing to provide an oil company with surface rights - or the right to come on a landowner's property to drill. The landowner will still receive the same lease and royalty payments as other landowners.

There were few questions from the Magnolia audience.

One dealt with the controversial process of "fracking." This involves pumping water and other fluids at high pressure into a rock formation with the goal of shattering the rock, thus releasing the oil within. Many people believe that this process contaminates, or has the potential to contaminate, water supplies.

A woman in the audience said that she wanted to negotiate a lease that would prohibit a drilling from fracking under her land.

Aside from that, the wells are encased and have multiple packing systems.

York said that fracking is so widely accepted within the industry that development of the Brown Dense would not be possible without it.