Why is Haynesville: The Movie being trashed by the Huffington Post writer...

while they love some move titled 'Gasland' (, which I have not seen, but I don't profess to see all movies....has anyone on GHS seen it)?
Am I just too close to the subject to be objective?

Haynesville: A Filmmaker's Hunt for Obfuscation


Oil is growing scarcer and more expensive. The horrific gusher in the Gulf of Mexico is certainly not helpful. Coal remains dirty and polluting. Non-fossil energy won't be on-line big-time for decades. America is racing toward a devastating energy crisis -- wait!

There are voices proclaiming that a savior has been found in the backwoods of northwest Louisiana and eastern Texas. It's called the Haynesville Shale that contains 230 hundred trillion cubic feet of gas. The Haynesville Shale is the largest natural gas field in the United States, possibly in the entire world. Along with other heavy deposits of natural gas scattered around our country, America has an energy bridge from today's dying energy sources to the future's energy promise. We're saved! So they say.

I have a policy of not writing negative reviews except when there is something truly rotten at the heart of a film. Like a critical voice is missing, or essentially information is ignored, and the film obscures more than it reveals. A film not with mere flaws, but a film that is shameful. Such as this film.

Haynesville: A Nation's Hunt for Energy presents the Haynesville Shale as a beautiful win-win situation for America. Rural landowners will receive fat checks (some more than a million dollars) from energy companies for their mineral rights and Americans will receive an abundant energy supply to run their cars and heat their homes and operate their businesses. Isn't America blessed?

Directed by Gregory Kallenberg (Eating Levi), this documentary follows three Louisianans living in the midst of the drilling and financial bonanza boom of the Haynesville Shale. There is a single mother who is organizing landowners to maximize the selling price of their mineral rights to the energy companies. There is an African-American preacher who is planning to use his fat check to build a religious school. And there is a self-described "good old boy" who uses his money to retain the land that he dearly loves. In this film the blessed are, then, a woman, a minority, and a nice redneck.

Premiering in March at the prestigious South By Southwest Film Festival in Austin, Texas, the gorgeous Paramount Theater was nearly packed, and the audience responded enthusiastically to the screening. This was not surprising since one of America's great challenges, acquiring plentiful energy, is presented as no problem.

But there are problems - problems that Haynesville ignores -- as does the US Government. Thanks to the spearheading efforts of Dick Cheney when Vice President in the Bush Administration, since 2005 natural gas drilling has been exempted from the Federal Clean Water Act and the Safe Drinking Water Act. The laws enacted to protect us are not protecting us when companies drill for natural gas. Isn't it time for the Obama Administration to reverse this exemption? And isn't it time for some answers on natural gas drilling, especially when using the process of "fracking?"

We do know there can be more than 500 chemicals pumped into the ground when drilling for natural gas. We know that each well produces millions of gallons of chemical-laced waste water.

We do not know, however, where this water goes. We do not know the effect all these chemicals are having on Americans. We know there are documented cases of faucet water from wells near drilling areas exploding when lit with a match. There is documentation of high levels of methane gas, arsenic, aluminum, lead and other chemicals in the drinking water of residents. This is not at just one location, but throughout the country where there is "fracking." And we know the Environmental Protection Agency has no legal justification to conduct a full investigation, thanks to the efforts of the Bush Administration. .

Let's back up. So, what good is receiving a maximum price for the landowners if they come down with liver problems and spend the rest of their lives shuffling from one doctor to another? What good is all this money if children in the Christian School get cancer? What good is the money if the "good old boy" suddenly cannot walk the land he so dearly loves?

Haynesville rolls out a long line of environmental experts, but they're culled from a narrow group with a narrower viewpoint. They avoid serious discussion about potential health effects of natural gas drilling, which is being hotly debated from Pennsylvania to Utah. Yes, America needs new sources of energy, and America needs to avoid more environmental disasters. We know this, right? This is not the mid-20th century! Environmental dangers exist!

Financial fairness to landowners is only a slice of the story about natural gas drilling in America, and not the main story. That alternative non-fossil energy sources are not presently capable of feeding energy sucking America and coal is not a good alternative to oil does not mean we should run blindly into natural gas drilling and ignore health issues. To minimize, marginalize, and ignore environmental dangers is to play Russian roulette with our lives and the lives of our children, possibly even our grandchildren.

As Haynesville rightfully points out, every action has its costs. But we need to know those costs. And we need to know the costs before we pay the price. Americans strongly supported the invasion and occupation of Iraq until they learned the cost in blood and money. Americans did not oppose the use of asbestos in construction until they learned asbestos was a carcinogen. Small American towns whole-heartedly supported the arrival of Super Wal-Marts until their cozy main streets turned into deserted streets.

Focusing on only benefits and ignoring costs is a corruption of cost-benefit analysis that is the basis of rational decision making. If we do not know the costs, then we don't know the actions we are asked to bless.

I do not know if natural gas drilling is truly dangerous, but I know that being unaware of potential dangers is extremely dangerous. If there is one film you should not see this year, it is Haynesville: A Nation's Hunt for Energy. Instead, you should begin your own hunt for the truth about natural gas drilling. I assure you that it will be more fruitful than watching this film.

And in your investigation, you may want to watch an excellent, insightful film that does explore the potential negative effects of natural gas drilling, Gasland.

Tags: Haynesville:, Huffington, Movie, Post, The, Why, being, by, is, the, More…trashed, writer...

Permalink Reply by Mac Davis on May 22, 2010 at 4:49
They hate it because any use of fossil fuels is pure evil. We should all be vegetarians living down on the farm, without electricity or automobiles, eating natural grains, and living together in peace and harmony.

Look at a few articles on the Huffington Post, and you'll realize that, politically, they're way to the left of Ted Kennedy.

Permalink Reply by Jack Blake on May 22, 2010 at 5:36
Off with the heads of the folks at Huffington Post cried Jack Blake!

"In his first documentary feature, director Josh Fox journeys across America to examine the negative impacts of natural gas drilling, from poisoned water sources to kitchen sinks that burst into flame to unhealthy animals and people. Is natural gas a viable alternative to our dwindling energy resources, or do the potential harmful effects outweigh the positives? Fox's film raises these and many more fascinating questions."

Permalink Reply by LP on May 22, 2010 at 7:39
The coal industry should be looked at by some of these film companies as well as environmentalist. I offer a local example. Inserted are photos of an area around Fyffe Cutoff in Marshall, TX. First photo was taken by Google Earth in 2005. Second photo, in the exact same location, was taken in 2009 after lignite mining. It speaks for itself. 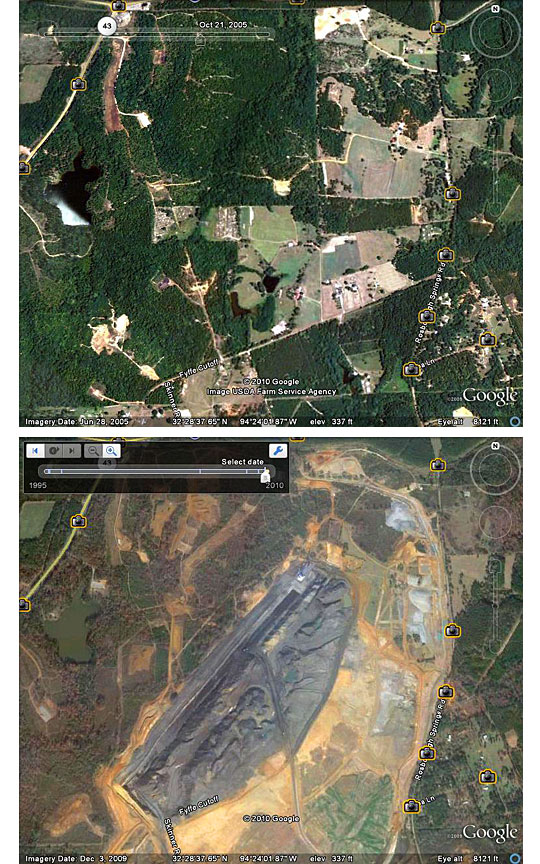 Permalink Reply by R Stoll on May 22, 2010 at 7:52
Would like to see two June shots of the area, instead of a dead Winter shot and a lush June shot. Apples and Oranges.

Permalink Reply by LP on May 22, 2010 at 8:17
LOL. If that looks like apples and oranges to you, hope you don't do the grocery shopping. Can't do anything about the season of the year that Google took the pictures. Maybe leaves on trees would make it look different. That is, of course, if there were any trees left in that pile of lignite mound in 2009. :-)

Permalink Reply by intrepid on May 22, 2010 at 23:45
Wonder what it will look like after they do reclaimation? Usually better than when they started?

Permalink Reply by ur dern tootin' on May 22, 2010 at 8:03
Your second picture is only a "snapshot" in time. Did you know that this lignite operation/land disturbance is only "temporary" and that the mining company is under law and stringent regulation to return the post mine area to its original condition? Companies are required to post millions of dollars with the Texas Railroad Commission (the regulators) to assure that such reclamation will happen. So your rationale is flawed!

Permalink Reply by LP on May 22, 2010 at 8:22
And what was my rationale? Other than showing the change in the land. I simply believe that Natural Gas drilling is less environmentally harmful than Oil and Coal. If the photos don't show a change in your eyes...so be it.

Permalink Reply by ur dern tootin' on May 22, 2010 at 8:44
Of course the Google pictures show a difference. But the future Google pictures will show (hopefully) a picture of an suitably recelaimed site similar to the pre-mine picture. LP, I'm not fussing at you. And I certainly agree that "shale drilling" is designed to minimize the environmental impact by reducing the footprint. :)

Permalink Reply by LP on May 22, 2010 at 9:10
Hey ya'll,
How about a smile ?
Check this out. :-)
A man was driving down the road and ran out of gas. Just at that moment, a bee flew in his window.
The bee said, 'What seems to be the problem?'
'I'm out of gas,' the man replied.
The bee told the man to wait right there and flew away. Minutes later, the man watched as an entire swarm of bees flew to his car and into his gas tank. After a few minutes, the bees flew out.

The man turned the ignition key and the car started right up. 'Wow!' the man exclaimed, 'what did you put in my gas tank'? 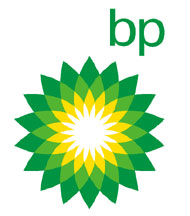 Permalink Reply by VSC DeSoto South on May 22, 2010 at 9:43
OMG...ROFLMAO...did I need this this morning. Bad night in a hotel which gave me the wrong room. My son is graduating from college today, lots of things to do places to be...last night i read that horrid article...it was nice to read a truly humorous joke to lightent things up for the day.

Now I can go eat breakfast without looking so tense, after reaming the hotel front desk and making them chqnge this gawd awful room!