In the first half of 2011, the Big Four benefited from tight supply-demand conditions for many key services, as frenzied drilling activity in North American shale oil and gas plays strained the industry’s capacity to meet these needs.

Hydraulic fracturing is a process whereby producers pump a liquid into a shale reservoir under such tremendous pressure that it cracks the reservoir rock. This creates channels through which hydrocarbons can travel, improving permeability. Over the past several years, US producers have honed this technique in a number of prolific shale oil and gas plays, increasing the number of fracturing “stages” along the lateral portion of a horizontal well.

Of the Big Four, Halliburton (NYSE: HAL) has the most exposure to the pressure pumping business in North America. With demand for pressure pumping outstripping capacity through much of 2010 and the first half of 2011, Halliburton benefited from a virtuous cycle of higher volumes and rising prices. These tailwinds explain why Halliburton’s stock soared 25.4 percent in the first half of 2011, while shares of Schlumberger (NYSE: SLB) gained only 4 percent. Shares of Baker Hughes (NYSE: BHI), which also has substantial exposure to North America, surged 27.5 percent during this six-month period.

But the outlook for the North American market remains uncertain: How depressed natural gas prices will affect overall drilling activity levels and the supply-demand balance in the pressure pumping market remains to be seen.

North American natural gas prices currently hover well below $3 per million British thermal units and are unlikely to stage a sustainable rally for at least two to three years. This bearish outlook has little to do with demand: US natural gas consumption has soared to a record high. 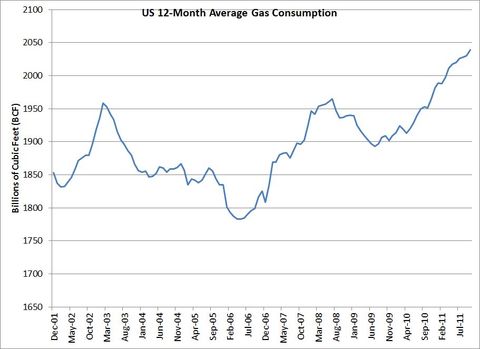 US natural gas demand is highly seasonal, with consumption peaking during the winter heating season. Increased use of gas in the power stack has created a second period of peak demand for the fuel in summer, when demand for air conditioning and electricity is at its highest.

To smooth out seasonal fluctuations in gas demand, our graph tracks the rolling 12-month average of monthly gas demand.

In coming years, US utilities will continue to retire older, coal-fired power plants and replace them with gas-fired facilities. Natural gas produces negligible emissions of sulfur dioxide, particulates and mercury and about one-fifth as much carbon monoxide and nitrous oxide as coal. Crucially, gas also produces about half the amount of carbon dioxide on an energy-equivalent basis.

The main driver of depressed US natural gas prices is a glut of production from recently developed shale gas fields such as the Haynesville Shale in Louisiana, the Barnett Shale near Fort Worth, Texas, and the Marcellus Shale. In 2010, the US overtook Russia as the world’s leading natural gas producer; that year the US flowed almost as much natural gas as Africa and the Middle East combined.

You’ll occasionally read claims that US natural gas reserves are overstated. Reserves are an estimate of the total volume of gas that can be produced from a given play based on two factors: the volume of gas in place and the percentage that operators can extract economically. Even a slight adjustment to assumptions about what constitutes economical production and estimated reserves can surge.

What really matters is the rate at which a particular field produces hydrocarbons over time. Oil and gas fields typically post their strongest output growth in the early stages of development, after which production rates decline significantly as geologic pressure diminishes. For example, the first-year decline rate for a single well in the Haynesville Shale and other plays can approach 80 percent, or one-fifth of its initial production rate.

By the same token, changes in reserve estimates don’t necessarily have much bearing on actual production. Between 1993 and 2010, estimates of US oil reserves increased slightly, while oil production declined by more than 1 million barrels per day (about 12 percent).

Investors should focus on actual production. As you can see, US natural gas production has increased substantially in recent years. This growth is even more impressive when you consider that offshore output fell precipitously in the wake of the Macondo oil spill. Investors also shouldn’t put much stock into claims that lower gas prices will prompt producers to reduce drilling activity, leading to a decline in output.

Many operators had already shifted their emphasis from the Haynesville Shale and other dry-gas plays to oil- and natural gas liquids (NGL)-rich fields such as the Eagle Ford Shale. After an unseasonably warm winter sent natural gas prices plummeting, Chesapeake Energy Corp (NYSE: CHK)–the largest independent gas producer in the US–announced it would slash gas-focused drilling activity.

The number of rigs drilling for natural gas in the US has declined to 777 from almost 1,000 in mid-2010. Nevertheless, natural gas output continues to increase unabated.

Although operators may have reined in drilling activity, each individual well drilled in a shale field is several times more productive than a conventional well; it takes far fewer rigs to produce the same volume of gas. Moreover, operators targeting crude oil in the Permian Basin or NGLs in the Eagle Ford Shale also flow large volumes of associated natural gas. For producers with acreage in liquids-rich plays, the coproduced natural gas is an afterthought; oil and NGLs account for the majority of the profit.

Here’s where the outlook gets murky. As producers reduce drilling activity in the Haynesville Shale and other dry-gas plays, the services companies are left with excess pressure pumping capacity in these fields. Instead of reducing the price of pressure pumping in these areas, the services companies have opted to shift this idle capacity to the Eagle Ford and other oil- and NGL-laden plays.

Services firms not only incur the direct cost of relocating their employees and equipments, but these assets aren’t generating any revenue during the move. Equally important, the redeployed crews must learn new operating procedures and adjust to the nuances of the particular field in which they’re working.

We have moved or are in the process of moving eight frac [hydraulic fracturing] fleets from primarily natural gas plays to liquids plays. This requires redeployment of people and equipment. It disrupts the very efficient operation, and as well is requiring us to make adjustments to our supply chain. It’s important to understand that these fleets that are moving are not looking for work, but in each case now are committed to an existing customer or one who we could not serve before, and in each case has or will displace a competitor in the liquids plays.

So while beneficial to us in the long run, these moves do not come out and do not come about without a short-term impact on our margins. First we lose the productivity of these hyper efficient 24-hour crews as they move away from locations with a solid infrastructure and a higher level of expertise. Then when they start in a new location, they’re not as efficient as they get used to new operating procedures and how their reservoir responds. And finally there is a doubling up on some costs as we generally have to use commuter crews while a local crew is changed–is trained in the new operation.

So we believe that these pressures that come from this on revenues and margins will be limited. The additional benefit we get from these moves is that even more of our revenue will be generated in the liquids plays where we still have the ability to increase prices, which will help to offset inflation pressure.

Halliburton’s fourth-quarter revenue grew 6 percent from year-ago levels, driven by robust liquids-rich shale plays. However, the firm’s net income declined in North America because of margin contraction. Management expects the firm’s North American margins to fall by another 100 basis points (1 percent) in the first quarter of 2012 because of mobilization costs and related inefficiencies.

Lesar and his team also emphasized they don’t foresee a collapse in profit margins, predicting that these temporary cost pressures would abate once the fracturing crews acclimate to their new surroundings. However, when asked what a “normal” profit margin would be in North America, management responded that it’s too early to tell when these effects will smooth out. The company also doesn’t plan to add pressure pumping capacity in 2012–the first time in several years.

These developments all suggest that margin growth in North America has stalled out for at least the time being.

Schlumberger CEO Paal Kibsgaard acknowledged as much during the Q-and-A portion of a conference call on Jan. 20, 2012:

Analyst: Appreciate your outlook comments, as always, Paal, but given this dramatic falloff in natural gas prices in the U.S. and subsequent concerns about E&P cash flows, if I could ask you to start in focusing on North American land. You’ve been clear about your strategy of reestablishing yourselves here and you’ve just given your outlook for a flat rig count, but does this very quickly deteriorating outlook for gas–is it influencing recent contracting behavior in U.S. land? And then I’ll just give you my follow-up now, which is that is it influencing your behavior, whether it’s from a contracting link standpoint or a CapEx [capital expenditure] standpoint? Are there any changes that you’re making now?

Paal Kibsgaard: Well, if you look at pressure pumping pricing levels, as I said, we continue to see downward pressure on pricing in gas in Q4. The liquid basins, we saw pricing basically being flat, some contracts being up and some contracts being down. Now, how this is going to go to hold, I think, is still uncertain at this stage, right? There is obviously a chance that the continued flux of capacity from the gas basins into the liquid basins is going to have an impact on liquids pricing as well. We haven’t really seen any downwards trend yet, but clearly, over the past quarter, the pricing has been flat. So that’s basically where we stand on that.

In this excerpt, Kibsgaard notes that prices for pressure pumping services remained flat in liquids-rich plays and acknowledges that the influx of capacity will have an impact on future prices.

My outlook for the North American market: Activity and margins won’t collapse, but investors shouldn’t expect the region to drive earnings growth in coming quarters.

Check out my free report on Master Limited Partnerships and MLP Investments for more tips on investing in this sector.