Horizontal drilling, improved seismic testing,  and liner casing are offering new hope for the deep minerals in parts of the Austin Chalk which runs from near Austin, Texas through the middle of Louisiana to Biloxi Mississippi.
In 1995, the USGS determined that the Austin Chalk is one of our Nation's largest, onshore domestic unconventional, continuous-type oil resource. More recently, exploration and production in frontier areas of Texas and Louisiana have shown that the Austin Chalk has additional potential as a continuous-type deep-gas resource mostly to the east and downdip of existing oil plays.
Over a decade later, now leasing and drilling activity is picking up in certain parishes of Central Louisiana following improved technologies.
Austin chalk runs from above New Orleans to Pointe Coupee, Avoyelles Rapides and Vernon Parishes

Permalink Reply by Les B on December 1, 2010 at 9:48pm
Abington, maybe it will be better this time around but the Austin Chalk in Central Louisiana was a bust in 90's because it was non-continuous and unpredictable. Of course it was different in Southeast Texas as the Giddings Field (Austin Chalk) was one of the biggest in Texas before the Barnett Shale came along.

Permalink Reply by Abington on December 1, 2010 at 9:57pm
Yes, you are right. Some others claim they have learned lessons from the 90s.

At least one company is putting money into it in Avoyelles Parish. Seven wells have been applied for by Nelson of Shreveport in the North Bayou Jack Field in Avoyelles. The first one should be flow testing by next week.

Permalink Reply by Les B on December 2, 2010 at 9:22am
It was just all the MM$$ that operators sank into the play for those deep wells. Originally the play was supposed to stretch across Central Louisiana and companies rushed to build up big acreage positions.

Permalink Reply by Ladyoaks on December 2, 2010 at 1:04pm
Jay/LesB-
How far North does the Austin Chalk run in La? Is it in Haynesville territory? 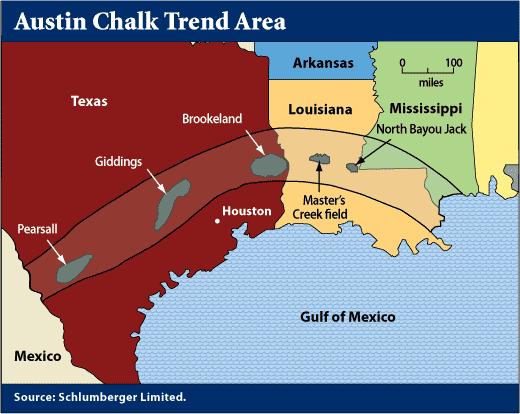 Permalink Reply by Two Dogs, Pirate on December 2, 2010 at 2:01pm
I got all the way down to Bayou Chicot in Evangeline Parish leasing for CHK. I don't think anyone thought that oil would have hit $10 per barrel back then. I think that had a lot to do with killing the chalk.

Permalink Reply by Harold5011 on December 2, 2010 at 1:58pm
Although the fieldwide production from the geographically immense Masters Creek Field may now seem impressive, the number of high cost wells & high cost laterals was even more impressive. Overall, the AUS C was a disappointment in central Louisiana. After about 90% of the central Louisiana AUS C wells had been drilled most all the players had realized they'd have been better off spending their $s elsewhere. Overall, it had to do with steeper than anticipated production declines.

Permalink Reply by Harold5011 on December 2, 2010 at 3:04pm
With the new technologies, it wouldn't surprise me to see the Austin Chalk finally become highly profitable in central La., from drilling new laterals on existing wells, but mostly from drilling new wells altogether in areas not previously explored.

May have also had something to do with E&P at a hundred miles an hour as well, drilling and booking production and reserves to drive the next round of financing to drill the next wells to keep booking more production.  When the prices cratered, things reversed quickly.  CHK almost tombstoned in the Chalk.

Planet of The Humans Exposes The Real Story of Green Energy