I recently had the opportunity to interview GHS member John Weisenhorn, a gracious man with an interesting background and an amusing story as to how he became involved in the Tuscaloosa Marine Shale. The interview has been edited for readability and brevity. This is the first in a series of member spotlights so if you know someone with an interesting shale story, please message me through the site. Thanks!

GHS: Tell us about yourself Mr. Weisenhorn. 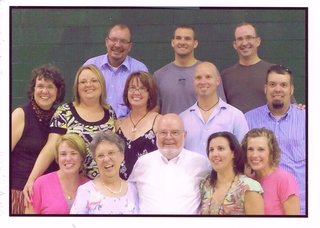 John Weisenhorn: I’ve been married to Rose 53 years and we have 11 children and 22 grandchildren. I’ve held many jobs in my 81 years, and most recently retired from being a Catholic chaplain at at retirement village for 9 years and probably the best job I ever had with the most fun I had working. I’ve enjoyed all of my jobs, working with good people doing good things. I’ve been in sales, selling conveyor equipment to industry. I spent 20 years in package handling in grocery stores. I spent 6 years with American Chain and Cable company. And way back in my youth I had an FCC license to operate a radio station and I managed that for 5-6 years. I have led a totally charmed life and it’s been marvelous.

GHS: We all have a story that drove us to the website. Tell us yours please.

John Weisenhorn: Many years ago, my aunt, bought the minerals for 877 acres in Amite County Mississippi. Several of her siblings thought she was goofy to do it. Some years later, she needed some money and decided to sell some of the minerals. There’s no surface rights involved, just minerals. She hung on to everything else and eventually died about 25 years ago, and when she did, she gave my siblings and me 80% of the minerals and gave 20% to her favorite charities. None of us as heirs gave it much thought and it became sort of a family joke because she herself had never benefited from it.

GHS: What are your aunt’s ties to Mississippi?

John Weisenhorn: My aunt was so far removed from me. When she was doing all this, I was entering high school and I wasn’t paying any attention to what she was doing.  I had met her only one or two times. She lived out west in Colorado and I don’t know how she ever got to Mississippi; it’s a total mystery and I have no knowledge of it.

GHS: When did you discover the minerals might be worth something?

John Weisenhorn: Well, a couple of years ago, I got a letter in the mail from Howard Pritchard with an offer to buy my mineral interest and I thought, “I don’t even know what this is.” So I went back and found the papers on it but had no idea what it was worth. I did some research online and found the number of the county clerk in Amite County.  I called him and told him my story and proceeded to ask why anyone would want these minerals all of the sudden and what they might be worth? He answered back to me, “I bet I can tell you the name of your aunt!” And he proceeds to tell me her name and that he was the guy that bought those minerals she sold so many years ago. I nearly fell out of my chair!”

GHS: So a couple of years ago, you received the letter expressing interest in your minerals and that’s what started you down this road. What happened after you talked to the county clerk in Amite County?

John Weisenhorn: Howard Pritchard, the man who sent the letter was pressing pretty hard to buy my shares but I told him I wasn’t interested. It was something like several hundred dollars he offered. The county clerk informed me there was quite a lot of activity in Amite and that whole general area because of the Tuscaloosa Marine Shale so I declined the offer by saying, “Howard, I’m not a wealthy man but a few hundred dollars, even a thousand dollars, isn’t going to make a significant difference to me so I’m not interested.” He wanted to know what would interest me and I told him to call back with a serious offer. So he came back with another offer and said, “Here’s the deal. I’ll buy half of what you own for $7,000 and you keep the other half.  If nothing ever comes from this you got $7,000 out of it. If something does come from it, you can still participate and you’ll have the $7,000.” That caught my interest. I’m retired and my wife and I have 11 children. Two of them live in Colorado and all in all I have 103 nieces and nephews, and grand nieces and nephews. I wanted to go see these people. So we sold to Howard for $7,500 and drove out to Colorado and spent two and half weeks out there and had a great time. The money just came at the right time.

GMS: So you sold half your minerals for $7,500 and you still own half.

John Weisenhorn: Yes, and I’ve been offered a lot of money for it.

GHS: And that’s what has driven you recently to the web and to GoHaynesvilleShale.com.

John Weisenhorn: Right. I recently got an offer for $2,000 per acre.

GHS: And you’re not inclined to hang on to it and wait for a well?

John Weisenhorn: I’ve been reading on GoHaynesvilleShale that a lot of people are having trouble collecting on their royalties. I don’t have any resources to take someone with $100 million to court to make them pay. They can ring me out quicker than I can fight. And they’ve got to hit oil and gas and they’ve got to pay me. There are too many ‘ifs’ in this. Howard told us to look at your GoHaynesvilleShale site and I see the struggle people are having. So I’ve decided to sell. And I got a call yesterday from someone who said they’ll top that $2,000/acre offer.

GHS: Have you found the Amite County group on the site helpful?

John Weisenhorn: Yes, I have. I have found GHS to be a good source to begin all my research. I go there to find out what’s going on in Amite county. I’ve had correspondence offline with two other people from the site that have shown interest in what I have. It’s been a good focal point for me and my nephew who’s also doing research on this. And Howard’s the one who told us to go there!

GHS: Many thanks Howard and to you, Mrs. Weisenhorn for telling us your story. John and his family are wonderful people.  However the family owns a non-participating royalty interest rather than minerals under this tract created by a reservation severed from minerals in a sale of the property long ago.   I will always be their friend and help them anytime they ask.