“If it were to be repealed, I believe that would un-level the playing field that we have among other states,” John says.

Mississippi has a similar tax break in place. Texas does not.

In Louisiana, horizontal wells don’t pay severance tax for the first two years of production, or until the drilling company recoups the cost of the well — whichever comes first. John says while horizontal wells do pay off big when they hit, they are much more expensive to drill. And they have a shorter production life than vertical wells.

“The longevity of the recoverable natural resources is much shorter than a conventional well,” John says in justification of the severance tax exemption.

The wells are drilled at an angle to a depth of 12-15,000 feet, then are drilled horizontally through the brittle layered rock known as shale. Hydraulic fracturing (fracking) breaks the oil or gas out of the shale in a big burst. The well produces about half its total product in the first year, and in 3 to 5 years, the well is done. So when the wells are most profitable, the state doesn’t see a dime of severance tax.

“A couple of years ago, it cost us $250-million,” Richardson says, referring to the big fracking boom in northwest Louisiana’s Haynesville Shale.

Richardson says the severance tax exemption will cost the state far more when drilling begins in earnest in the Tuscaloosa Marine Shale. That massive oil deposit runs across the entire lower third of the state.

“They’re saying that you have almost nine billion barrels of oil there,” Richardson says of the geologists’ predictions.

And, he adds, the severance tax exemption will mean Louisiana won’t get revenue it desperately needs.

Mississippi has a similar tax break in place. Texas does not.

Every pink dot you see on this map is a currently exempted Haynesville well. A new hoop was added for operators last year in order to take advantage of this exemption. It's not now automatic even when drilling into 'tight formations'.

The mineral owners also benefit from this tax break and they put that tax money saved back into their local economies. I bet there would be a lot of push back in trying to end this exemption. 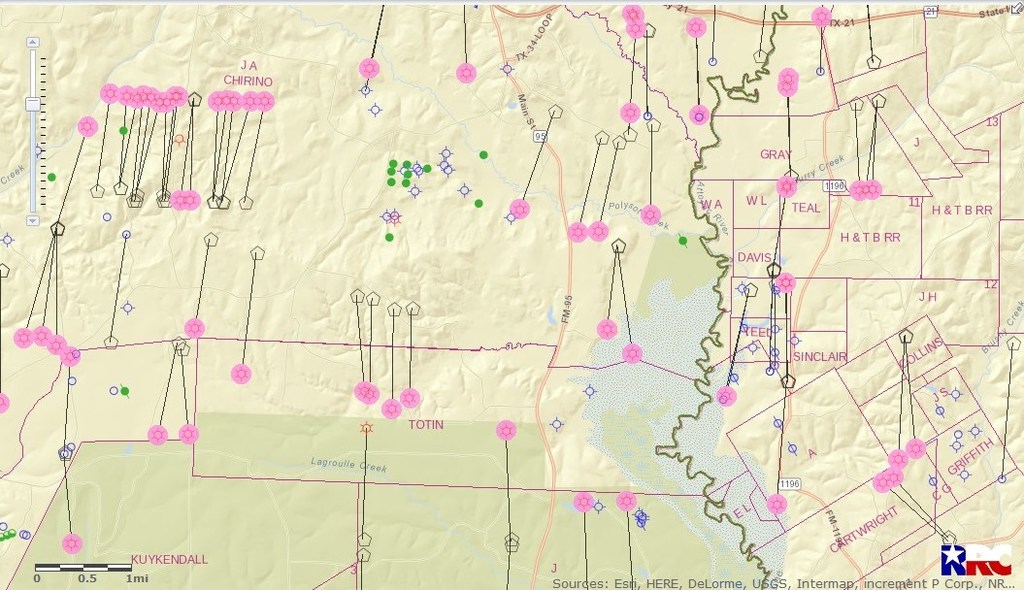 Thanks, Julie.  How long is the exemption from severance tax effective?  By "not automatic" do you mean the operator must apply for the exemption?

This issue is being reviewed along with most of the expenditures the state makes in the form of business incentives owing to the fact that there is a huge continuing state budget deficit that has gutted higher education and health care to the point that there is basically nothing left to cut without shutting the doors.  One time monies and non-dedicated state funds have been raided each year and there are few if any pots of money left to be appropriated to the general fund.  The problem is so sever that some legislators have suggested a tax on hydrocarbons transported and processed in the state.  That such a controversial issue is openly discussed by Republican legislators illustrates the magnitude of the problem.

There is still a lot of prime real estate left to sell and when that goes we will have nothing.

I think the legislature is ready to stand up to Jindal and make some tough decisions to increase state revenue.  It's making the O&G industry quite nervous.

Eligible high-cost gas shall be shall be entitled to a reduction of the tax imposed by the Texas Tax Code, Chapter 201, for the first 120 consecutive calendar months beginning on the first day of production or until the cumulative value of the tax reduction equals 50% of the drilling and completion costs incurred for the well, whichever occurs first.

(Lots more but I aint typin' all that and it won't let me copy and paste for some reason.)

From what little I've read... there are several exemptions a well can qualify for but on this 'Tight Formation' thing it looks like that now not only do they have to get an area designation for the target 'tight gas' formation (see the earlier attachment) but they also have to ask for a well designation and (if I read it correctly) submit data from the well to support the request.That is what the article in the previous link is talking about.

There are exemptions for high-cost wells, deep wells (below 15,000'), others for low producing wells... even shut-in wells (seems counter productive, that one, but what do I know...). I'm not digging through the tax code to see just how much incentive we give operators but it appears that it's a lot.

Thanks.  I wonder how many of the wells qualifying under these state incentives would not have been drilled without them.  My guess is zero.

I think you are correct. Certainly the southern extension wells which are 14,000' or so. Very expensive wells.

I know LA needs revenue and it needs better education, but this economist knows very little about the present and nobody knows the future. The only reason wells are being drilled now in the HA is that the basis differential with Marcellus is $1.50/mcf+ and everybody views lease bonus, MVC gathering and MVC transportation as "sunk costs.". When the pipelines are in place, Marcellus will kill HA because the wells are less deep, cost less and have much better EUR (and some are wet).

In case the economist hasn't noticed, at $50/bbl, E&P companies are exiting the TMS in droves. So good, as PA institutes a severance tax, let's remove incentives to drill in LA when our NG resources (HA) can't compete with Marcellus, and probably Utica, and  in oil TMS can't compete with anything (unproven, expensive and technically difficult) and particularly Eagle Ford, Permian and Bakken. When we get the state's finances straightened out and, hopefully, it's education properly funded, perhaps the state will get a a more thoughtful and current economics faculty at LSU (really, the TMS is dead until oil is north of $100).

This economist has a very short sighted view of the reality of the need for an incentive to drill shale wells.  If there is no incentive then the wells simply will not be drilled. First, Leasing will stop. The State gets income tax from the people leasing. When a well site is located, the State and Local govts. start receiving sales tax on all materials and services rendered on a site. Once a rig moves on site the Parish and School Districts receive property tax on the rigs. Again, there is the sales tax on everything that goes into drilling that goes into drilling the well - casing, mud, etc.  Then there are the wages and salaries of the personnel that work on the well site. All have income tax collected on them. Then there are the local businesses that sell everything from food to fuel to the workers that come into the area. This economist can't see the forest for the trees. He simply has not done the research that a real economist should do. This leads me to believe that there is a political agenda that he is pursuing for personal or corporate purposes.

Contrary opinions noted.  And it is appropriate to look at the TMS and the HA as special circumstances.  Here's the problems.

Fluctuations in the price of hydrocarbons are a given.  Marcellus gas that may come to the Gulf Coast market and compete with HA gas will not be as cheap as it is currently for long.  The challenge in that region is connection to markets especially the populous NE.  Having built pipelines through the dry gas region of the Marcellus I can tell you that those historic lines served a limited number of commercial/industrial customers.  That is changing as new pipelines are being built and although the process has been slow for a number of reasons there is no doubt that connections to most of the upper NE will be in place by the end of the decade.  Marcellus gas, especially from the dry gas window, will cease to be as cheap because it can be sold for a higher price at hubs that serve the far greater NE markets.

Keep in mind that the deep oil well incentive is tied to the exemption of state severance tax.  In the case of the TMS that is the new oil category which is 12.5% tax.  The highest of any state as far as I know.  If the intent is to incentivize development  investment and reward operators that drill LA wells, a reduction in the severance tax is a much better approach than the current severance tax exemption.  One of the reasons that the horizontal well and deep well incentives were originally passed was to mitigate the high severance tax.

Tax reform in the state of LA will likely touch the O&G industry in some way.  That process should look at the industry as it exists and operates today and make changes across the board.  Onshore and shallow GOM operators should get a lower severance tax rate.  Hydrocarbons transported through or processed in the state from production outside the state's  boundary especially the GOM limits should, IMO, pay a tax.  That tax rate would be very low and spread over many companies but would generate a significant amount of revenue.

If the state had not been aggressive to create so many business incentives and to roll back certain taxes we wouldn't be in such dire straits.  So now revenues will need to be raised or important institutions and public services will suffer past the point that the average Louisianian will abide. Many high decline wells producing from unconventional reservoirs will produce 70 to 80% of their lifetime total in their first two years and the 12.5% severance tax effectively becomes 2.5% of their total production.  The incentives could be dropped and the severance tax rate cut to 5% on new oil.  That would benefit not just the major and mid-major operators that drill those expensive deep and horizontal wells but all the smaller companies that do not.

There is always a political agenda.  And legislators will not over look all the ancillary economic benefits of drilling.  The deep well and horizontal well incentives are only part of the debate to be had.

Link to LA severance tax on oil and gas: