Permalink Reply by Greedy Landowner on March 13, 2012 at 8:55pm
Is there a way to cut and paste the rest of the article?

But the foundation of this wealth has started to crumble. The price of natural gas has plunged to a 10-year low, prompting a flight of energy companies from gas fields across the country.

Here in DeSoto Parish, the 2008 discovery of the Haynesville Shale—a layer of rock infused with natural gas 10,000 feet underground—has been a windfall for local governments. 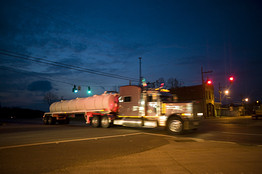 Extra tax dollars paid for the three football fields, at nearly $2 million apiece, as well as road and water projects. For the last two years, the school district has doled out annual bonuses to its 750 employees of $8,500 each, a notable sum in a parish where the median household income was $36,890 in 2010, according to U.S. Census figures, well below Louisiana and national averages.

But in recent months, the hotels and RV parks that were built to accommodate energy workers have sat half-empty. Restaurants have seen their sales collapse. Local landowners have seen their royalty checks from drilling companies fall by half in some cases.

Shelby Spurlock, a former cellphone saleswoman who opened Café 171 to serve catfish and hush puppies to oil-field workers, said business was "phenomenal" when the restaurant started up in September 2010. But it has fallen off sharply in recent months and she has had to lay off several employees. 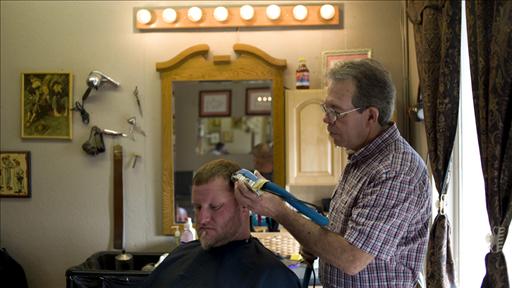 As natural gas prices have plunged, so has the fortunes of towns in traditionally poor Northwest Louisiana, which were thriving when natural has prices were high. Daniel Gilbert has details on The News Hub. Photo: Brandon Thibodeaux for WSJ

The number of drilling rigs in the parish had dwindled to 24 last week from 54 a year ago, according to data from oil field services company Baker Hughes Inc. As the drillers depart, so does the spending they lavished on the community.

Sales tax revenue for the parish and DeSoto Parish School District soared during the drilling boom. The district is still better off financially than before the Haynesville discovery, but the revenue has begun to fall. Since September, the school district has collected less in sales taxes than it did in the prior year, down as sharply as 28.5% in December from the same month a year earlier.

"We are expecting it to continue decreasing. We just don't know when it's going to level off," said Walter Lee, the school superintendent.

A similar, though less dramatic, trend is playing out in parts of Texas, Arkansas and Pennsylvania as companies move their drilling rigs elsewhere to hunt for oil, which is more lucrative in Texas, Oklahoma and Ohio than gas. Local economies buoyed by gas drilling are facing steep drop-offs in revenue from sales taxes and a tax on gas production called severance tax.

In recent years, energy companies have extracted record amounts of natural gas by combining new technologies to unlock gas trapped in shale. The surge in supply has far outpaced demand for gas, which has dropped during an unseasonably warm winter.

The resulting low gas prices are good for consumers and other users of gas here and across the country, and help cut the U.S.'s reliance on foreign energy supplies.

Nationally, the number of rigs drilling for gas has fallen by more than 200 from a year ago to 670, while those targeting oil has risen by nearly 500, according to Baker Hughes. Major gas producers such as Chesapeake Energy Corp. are dialing back their natural-gas output.

In Wyoming, which gets much of its revenue from natural-gas royalties and severance taxes, the plunge in prices prompted state economists in January to scale back their revenue projections by $155 million through 2014. This probably will lead to cuts in education and social services, officials say.

"Natural gas is just killing us right now," said Bill Mai, co-chairman of the committee that forecasts Wyoming's revenues. "The bigger problem is we don't foresee a quick turnaround, unless pretty much the whole country goes into an ice age at this point."

In DeSoto Parish, with a population of less than 27,000, the comedown is particularly jarring. The parish's labor force saw a big increase in 2008, peaking at about 12,000, but it now is down to 11,300, according to the Bureau of Labor Statistics. 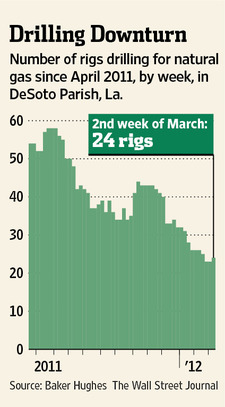 Mr. Lee, the school superintendent, said he is planning to cut or eliminate the employee bonuses. The district also could stop paying into a fund for future retiree health-care benefits, to which it has contributed more than $40 million since 2008, and raise property taxes to the highest approved level.

Not everyone is cutting back. Mansfield's city clerk said he hasn't yet seen sales-tax collections drop, though his latest figures are from November. The city council recently voted to buy a $30,000 Ford Expedition for the mayor's use.

But businesses that cater to the drilling industry are feeling an economic whiplash.

Rusty Wren left his family's bottled-water business in 2010 to open the Heart of the Haynesville RV Park. His 178 sites were completely booked until three months ago—now, more than half are vacant.

"We're hoping that the price of natural gas is going to go up," Mr. Wren said.

This is a common refrain around town, voiced by the general manager of a newly opened Comfort Inn & Suites and an 18-year-old manning the Lonches Doña Licha taco truck.

Up the highway from Mr. Wren's RV park, the number of customers at Shank Cat's Bar-B-Que has dropped by half. The wooden shack had extended its hours to cater to natural-gas workers. "It may be we just go back to being open for weekend lunch," said co-owner Ernestine Morrison.

And here you see why tax payers NOT school administrators should control the funds that are spent in public schools.  I have raged about the short sightedness of school board members and administrators for five decades.

What prudent manager would spend this money as ALL the schools have done? Every school has one of those lit up "vanity" boards in front.   Here where I live they not only put millions into the football stadium, field houses, artificial turf and luxury busses but they built an administration building a mile from the school itself.  Why?  Because they had the money and it burned a hole in their pockets.

We need new school buildings here..but the tax payers will now be asked to pass a zillion dollar bond issue later for those.  And the expanded budget the schools have been operating under because of the Haynesville tax dollars will continue but home owners will see their property taxes go up hundreds of dollars.

I didn't see one dime of this money go toward anything that enhanced education.  Oh ..what do I get when I question these expenditures on football related stuff?  That if they didn't have foot ball the kids would not attend school.  They WANT their teen girls out there on the sidelines in revealing outfits doing sexually suggestive routines creating pedophile dreams.  The remark by the principal that the kids would not attend classes without all that stunned me.

Well,  so what?  If these parents and kids do not want an education good riddance.  Educate the ones that do want one and give them a good one.  Education I mean.

It boggles my mind also! Here we are once the greatest country on earth, now we are falling behind in math and sciences, why? Because if you play football and you are good enough you can get a full ride scholorship to the college of your choice, but if your smart and get a 4.0 gpa all through high school (like my son did) you will be lucky if you can get a Pell grant.

By the way my son is now a Mechanical Engineer because  of his hard work...just sayin.

Permalink Reply by Greedy Landowner on March 14, 2012 at 10:45am
When you look at total tax revenues collected by the school district (which incidentally are not printed in this story) the cost of the turf is only a very small fraction. So small that it bears no weight in a logical discussion. But, the turf becomes a lightning rod for everyone who has ever been pissed off at the schools (there are many). However at the end of the discussion you still have the turf and you still have those who are pissed off. Thus goes life in a rural setting.

This has been an amazing blessing for so many humble, honest and hard working people. People I would trust far more than any elected official or self serving reporter/fiction writer. Local governments have wrestled with problems that are good ones to have! Everyone with any sense knew that a slowdown would occur. It saddens me to see such controversy created over something so positive. But controversy is what sell magazines and subscriptions. I can only speak for myself and I didn't even come close to getting rich, but I'm just thankful for what has been given!

And what remains to be given in the future!  This is no end.  It is a speed bump.  90+% of the Haynesville and Mid Bossier wells are yet to be drilled.  Some young men and women will take their first job in the Haynesville Shale and some of them will be retired before the last well is drilled.

Depends on your definition of "recover".  Will prices increase?  Certainly.  When?  Maybe in the last quarter of 2012 or first of 2013 would be my guess.  How much will prices improve?  Small increments, maybe above $3.50 depending on how many companies continue to add dry gas production.  Best case scenario with an improving economy and support for greater use of natural gas, maybe above $4 sometime in the later half of 2013.  I'm not sure I will see double digit natural gas prices in my lifetime even with export of LNG and increase in use as vehicle fuel.  I think that natural gas is a value to consumers and a reasonable profit to operators in the $5 to $6 range across all of the unconventional gas plays.

This gave me the laugh of the day...on Skip's health (issues?)

May he have a long active life...no matter what gas does.