Then why does he not support the Keystone pipeline so we can use more Canadian Oil and save the USA oil for our grandkids along same line of thinking? Reason is he owns the RR that transports the oil from Bakkens field and from Canadian. Reason is SIMPLE SELF GREED 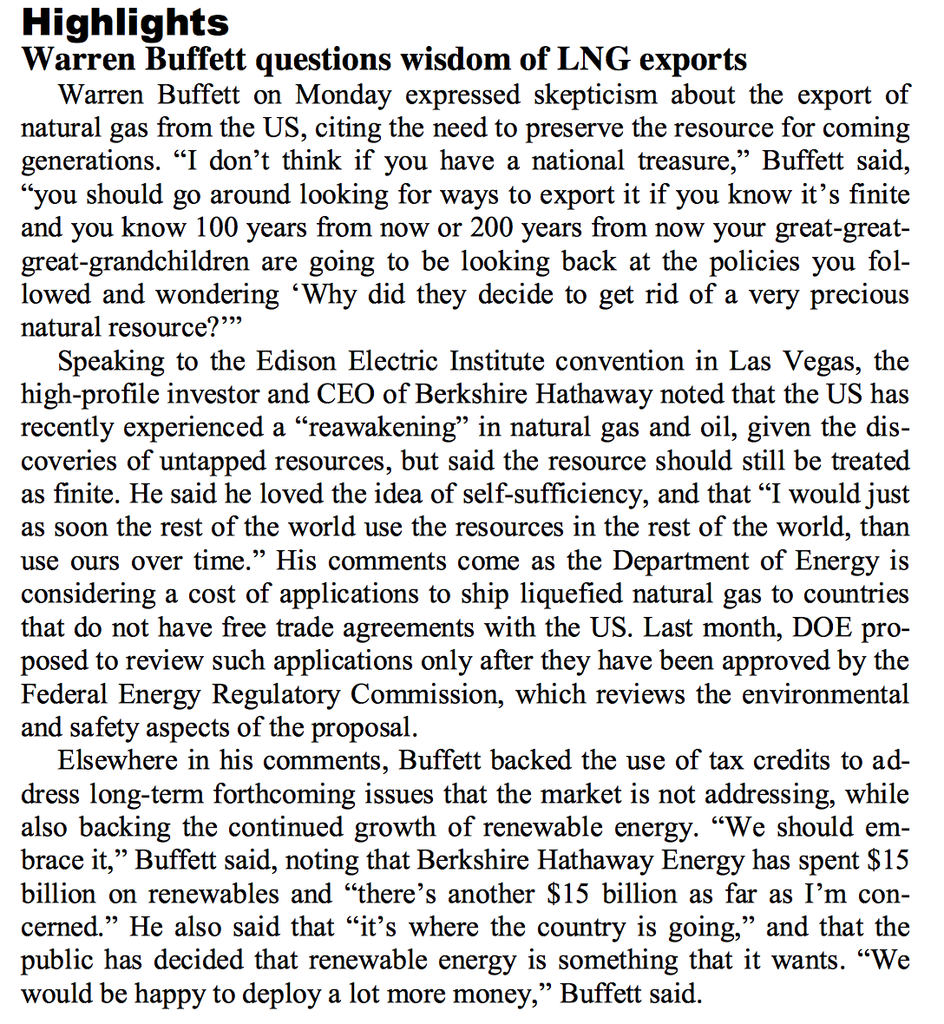 i believe you're spot on. he owns many companies that benefit from low ng prices, the rr especially. they're looking at cng/lng to fuel their choo-choos in lieu of diesel.

Permalink Reply by Coolmeanz on June 21, 2014 at 3:20pm
The keystone oil will not be used for the U.S. It will be piped to Houston turned into deisel and then shipped to South America where it will be for their use.
It is odd though I seen Buffett on Squawk Box about a week or two ago and he stated: "Yes, we are investing large amounts into wind farms; not because they are making money, in fact they are loosing money, its only for the tax write off...

Thank you, finally somebody who understands that the Keystone oil will not be used in the US, but we have to take all the environmental risks shipping it across our county.  Why do you think Canada doesn't what to ship it across its own country.  Canadian crude can also be shipped from US ports as it is not considered domestic production.  Also the "Canadian oil" could cause USA royalty owners to receive smaller royalty as the price of their oil could go down as the cheaper Canadian oil, $20 cheaper than WTI, fills our refineries and the need for domestic oil falls, since it can't be shipped outside of the US as crude oil.

I'd add that the whole debate is somewhat of a tempest in a teapot.  Supporters regularly overstate the benefits particularly as to the jobs created and the potential impact on the price of a gallon of gasoline.  Permanent jobs are relatively small in number as it doesn't take that many employees to operate and maintain a modern crude pipeline.  Studies by reputable experts have estimated that the pipeline might have the effect of reducing the price of gasoline at the pump by 2 to 4 cents.  Hardly something to jump up and down about.  The antis overstate the potential dangers of a crude pipeline and rail against the nature of tar sand crude.  Tar sands crude is actually a prime market for the huge volume of domestic condensate that is being produced from tight unconventional plays and is required as a diluent to thin the crude for pipeline transport.  The Canadian tar sand production will find its way into the global market some other way if not by the Keystone XL.

the b_tch of it is that our gom refineries are designed/configured to process the world's nastiest heavy and/or sour crude. canadian tar sands oil really fits the bill. using it in lieu of venezuelan and saudi/middle eastern heavy/sour crude would not make me loose a wink of sleep.

nor, would our refiners because they're ready/able to process heavy/sour crude slates. in a related matter, the most polluting things on our earth are ocean going vessels, other than war ships or passenger vessels. if you ever saw bunker fuel, you wouldn't believe that we could/would burn such stuff. high sulfur coal is like baby's breath in comparison.

so, if saudi heavy/sour crude was diverted to refineries in se asia, like singapore, and replaced in the us by incremental keystone heavy oil.... well... from a carbon standpoint, the world's been done a huge environmental favor.

our shale oil/condensate is light and sweet. if we had the ability to refine it that would be good. but, we don't. and, due to some carter era law, our domestic shale crude/condensate can't be shipped overseas. can you imagine that jimmy is still 30+ years later helping us out?

canadian oil sands production is priced much lower than wti for two reasons: one, its really sh_tty stuff and, two, its trapped like a rat with limited takeaway options. note: lets all give thanks for the administration's five year and counting  review of keystone xl. i feel better knowing they're looking out for me, and, i suggest you should, also.

imo, the correct economic decision, is to import all of the canadian and mexican heavy oil our refineries can process. and, in doing so, back off imports of venezuelan and saudi heavy/sour crude, and, to export all of the light sweet oil/condensate that we can't presently refine.

Jim, that's an interesting analysis. I hope others chime in too. I have not followed the pipeline issue very much. But, your analysis may be spot on ...

"canadian oil sands production is priced much lower than wti for two reasons: one, its really sh_tty stuff and, two, its trapped like a rat with limited takeaway options. note: lets all give thanks for the administration's five year and counting  review of keystone xl. i feel better knowing they're looking out for me, and, i suggest you should, also.

imo, the correct economic decision, is to import all of the canadian and mexican heavy oil our refineries can process. and, in doing so, back off imports of venezuelan and saudi heavy/sour crude, and, to export all of the light sweet oil/condensate that we can't presently refine."

unfortunately, the answer to your question is, yes.

Jim, I completely agree with with you opinion of the correct economic decision. All bottlenecks produce pricing disruption (see Marcellus differentials and WTI/Brent spread). I would rather let the free market solve those (pipelines, terminals and ships). However, I think your calendar may be a little off when you say "due to some carter era law." I believe the law (Export Administration Act of 1969) was passed  when the President was Richard Nixon and it gives the President the authority to grant exemptions from the export ban. Here is the language:

(b) Condition precedent to exportation; express finding by President of no increase in reliance on imported oil or gas

Before any oil or gas subject to this section may be exported under the requirements and provisions of the Export Administration Act of 1969, the President shall make and publish an express finding that such exports will not increase reliance on imported oil or gas, are in the national interest, and are in accord with the provisions of the Export Administration Act of 1969.
Basically, every US President since 1969 (Nixon, Ford, Carter, Reagan, Bush 41, Clinton, Bush 43 and Obama-28 years of Republicans and 16.5 years of Democrats) have had the authority to deal with a free market approach. NONE has with the exception of minor exemptions. It will be a political hot potato

sir, thanks. i'd always heard/believed it was president carter.

fwiw, in '69 i was in 9th grade at t.h. rogers jr high school. it doesn't excuse my ignorance, but in 9th grade i was way more interested in things(girls) other than civics/government affairs.

and, i agree it'll be the hottest of potatoes

It depends on which law.  The Energy Policy and Conservation Act was passed on Dec. 22, 1975 and it is this law that the media claims ban the export of crude oil.

From oil & gas journal.  Congress banned exports of crude oil when it passed the Energy Policy and Conservation Act of after the Arab oil embargo of 1973-74. The law also extended oil-price controls, set vehicle fuel-use standards, and established the Strategic Petroleum Reserve.

Probably all of these laws have an impact. I was just correcting the 9th grader who was watching girls but grew up to get the right economics. In 1975, Gerald Ford was President and in 1973-74, Richard Nixon was President. Still trying to get the Carter-era language correct. I suspect the root cause of Congress CORRECTING a problem was the gas lines and ecomonic disruption of the Embargo. Price controls and  barriers almost always produce unintended consequences from Congress fixing problems.

Thanks for posting this adubu. I have a couple of friends in the financial services industry who regard Buffett as a wise man whose advise should be followed to the letter. However, I am more contrarian and even geniuses are wrong sooner or later. I do think his holdings influence his PR and he clearly wants to save his 15 billion investment in alternative energy. I don't blame him for trying to save his $$.

Like Buffett, I also want to see renewable energy sources grow (and I am also a stickler for really seeing how "green" certain rare metals are)  If we had continued with R&D 30 years ago we could have been much further along. Of course, I usually say more research. It's what I do in my daily work (history) But, just imagine the US if we were wising using CNG and renewables.

I don't want to deplete our fossil fuel and water supplies and I don't want another generation dependent upon OPEC or any other cartel's oil. We need to control our own energy destiny and I want other peoples to be able to do the same thing.