I’ve had the pleasure of speaking to Lynn and John Irving on several occasions. They are the gate guards on a well that I’ve visited. They are a fascinating couple that are from New Zealand and now working part of the year in the states for Gate Guard Services to provide support for gas well locations.

Bobi: How did you get into this line of work?

John & Lynn: We met a couple at a camp site and they mentioned this line of work. We researched it on the internet and applied at several locations.

Bobi: What have you done prior to working as gate guards?

John & Lynn: We’ve both done numerous other jobs, but most recently John worked at a Marina for about 5 years. We remodeled homes and John has rebuilt a sailboat. He frequently looks for boats to buy and restore. We both love anything to do with the water.

Bobi: How did you end up in the United States from New Zealand?

John & Lynn: Our son met a girl on the internet and they married and have given us three wonderful grandchildren. They live in Michigan so we traveled to the states to spend time with them. We only work during the Winter to get away from the weather there.

Bobi: I see you have your bicycles with you. Have you been able to ride them on many of the locations that you’ve been on?

John & Lynn: No. This is the first location that we’ve been on where we’ve actually been able to ride. On most other sites we’ve been located in the “outback”, but we do usually ride when we sight see between jobs.

Bobi: What are some of the places that you’ve visited since coming to the states?

Bobi: How many states have you worked in as gate guards?

John & Lynn: Just Texas and Louisiana. This is our second location in Louisiana. We worked on one site at Loggy Bayou. We couldn’t believe how much of a bog that it was. This location is also surrounded by a lot of water. When we worked in Texas it was always quite dry and the water trucks would have to come by frequently to diminish the dusty conditions.

Bobi: How long do you usually live at the site location.

John & Lynn: It varies. The longest we’ve been on one site was 56 days. Several people had turned the job down before we took it. The road there was so rough that it took an hour for us to go 15 miles. Some other guards that we know have been on locations for as much as a year.

Bobi: The site that you are on has longhorn cattle, what is the most interesting thing that you have seen while working.

John & Lynn: We like the cattle here. Lots of times when John goes out at night the bull will come up and lick his arm. I guess it’s for the salt. When we worked in Franklin, Texas it was almost like a wild life reserve. It had wild horses, wild hogs, deer and armadillos. That was the first time we saw armadillos.

Bobi: The South is known for our cooking and Louisiana is specifically known for our Cajun food. Have you had a chance to sample any of it?

John: Yes we’ve had crawfish. They are good but Lynn likes them much more than I did. They were a bit spicy for me. They are exactly like the crayfish that we get in New Zealand. There they are more similar to lobster and not spicy. Lynn is much more adventurous in the things that she will eat.

Lynn: I liked the crawfish quite a bunch. I was sleeping when you brought by the alligator and when I got up I spotted the container in the fridge. I had a little sample and couldn’t figure out what it was. It was wonderful. The aroma drifted out the minute a opened the refrigerator. John told me it was alligator when he woke up. I like to try what I can when we travel. I’ve always wanted to see the world and sample the local culture. We’ve even traveled to England and France to house sit.

Bobi: What do you like least about the job?

Lynn: Our sleeping schedule. I usually go to sleep around 6:00 pm and begin work at 1:30 am and then John sleeps from 1:30 am till about 9:00 am. It would be nice to be on the same schedule. We just work with each other though. We know one couple that is very strict with their schedule. They each work 12 hours and neither assists each other during their shift. We just work as a team. Sometimes I’ll be cooking and he takes the gate or I’ll be off of site doing laundry or shopping.

Bobi: What do you like most about the job?

Lynn & John: We like the traveling and seeing sites between jobs. We also like the friends that we’ve made with the drilling crew and other gate guards.

Bobi: Do you ever feel in danger on a location?

Lynn & John: No not at all. We’ve worked a lot of work over locations and been on site when frac’ing is done. We are very impressed with the safety precautions that are taken.

Bobi: Thanks for talking to me. Next time I stop by I’ll bring some bread pudding. 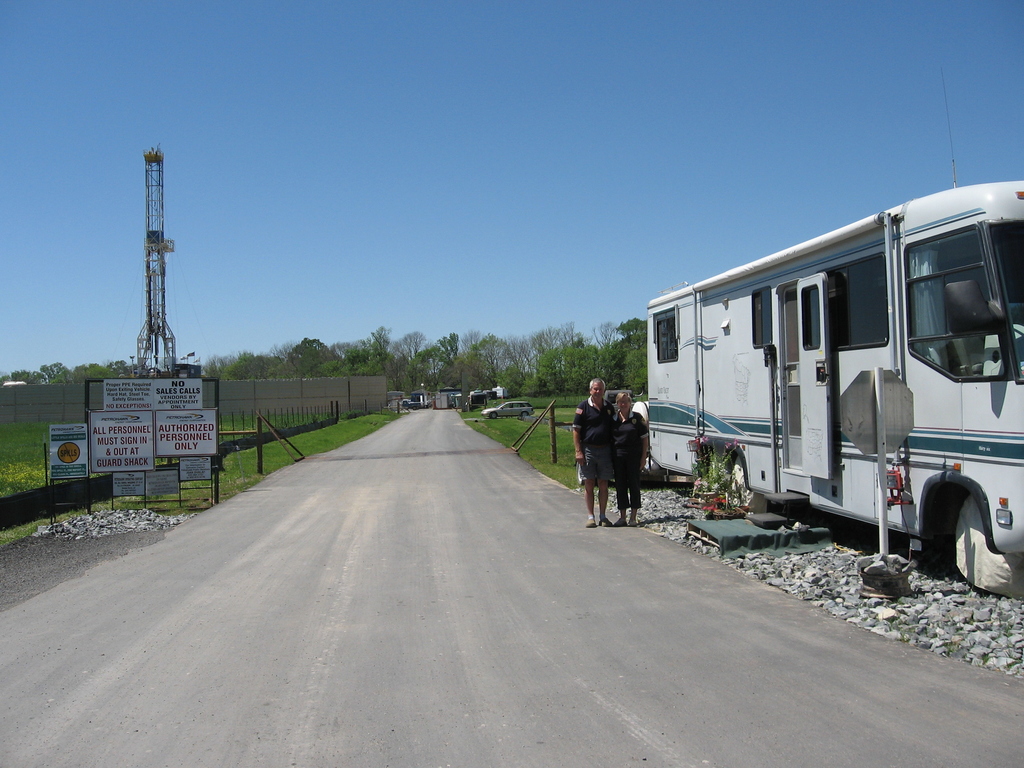 Comment by ur dern tootin' on April 12, 2010 at 10:01pm
Bobi, very interesting human interest article. Both of your recent pieces on GHS have been great. Good job!

Comment by Big Daddy, bcnr on April 12, 2010 at 9:19pm
That's great Bobi! I think you are the "Ex-Officio GHS Correspondant" now! Can I get some bread pudding next time I roll in? I think I had some last year and it took awhile to come down from the sugar high.

Comment by Parkdota on April 12, 2010 at 10:38am
I really enjoy your interviews. Being out of state it allows me to feel more involved in the HA, and I like that. Thanks so much.